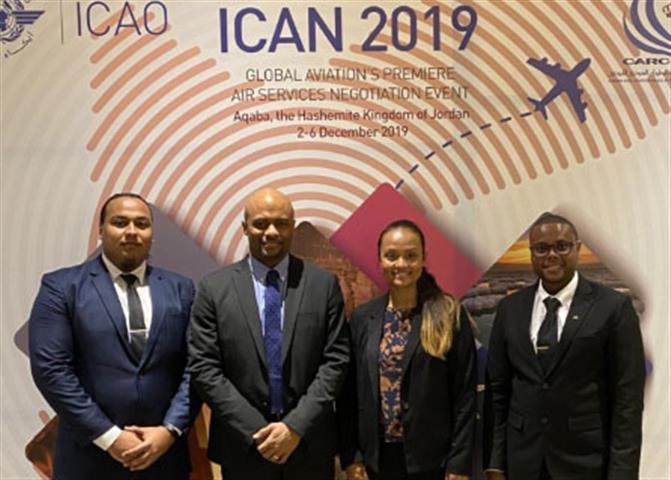 This annual meeting which is hosted by the international Civil Aviation Organisation’s (ICAO) was held in the Hashemite Kingdom of Jordan from 1 to 5 December.

The two bilateral air services agreements with Zimbabwe and the Dominican Republic were signed by Ambassador Jean-Claude Adrienne, who is based in the UAE.

This event, which is the largest Air Services negotiation platform, attracted 61 states and seven international organisations.

It was officially launched by the Minister of Transport of Jordan Dr. Khalid Walid Saif, representing the Prime Minister of Jordan, His Excellency, Omar Al-Razzaz. In his opening remarks Dr. Saif noted the importance of this event and emphasized that this platform is unique in both shape and form; in that it sheds light on the many challenges and opportunities in the conduct of Air Transport regulated by bilateral Air Services Agreement.

The key note address at the opening ceremony was done by the outgoing President of the ICAO Council Dr Bernard Aliu.

“It will be by virtue of the modernization and convergence of regulatory frameworks that industry will ultimately be provided with a more favourable and open operating environment leading to new and expanded air transport markets,” said Dr. Aliu.

“The signature of these agreements attest to Seychelles’ commitment to increase the number of regulatory framework that would allow the country to boost connectivity with the rest of the world,” Ambassador Adrienne said.

He added that inevitably, such Agreements translate into tangible gains for Seychelles who relies heavily on tourism and trade as drivers of our economic development.

“ Zimbabwe and the Dominican Republic are two countries with whom we enjoy excellent bilateral ties and we believe that the signature of the BASAs would elevate our relationship with these two countries to new heights,” said Ambassador Adrienne.

The Seychelles delegation also met with Cyprus, Paraguay, Senegal, Belarus and Guyana and secured five new Air Services Agreements. These air transport agreements have been initialed and awaits signature. In the period whilst awaiting signature the administrative elements are currently in force.

SCAA’s CEO, Mr Albert stated that this year’s ICAN has been very fruitful, ‘we had worked tirelessly in preparing to participate in this most important event.’

“Looking at what we have accomplished, we are very proud that SCAA is delivering on its promise and mandate to continuously expand the country’s Air Transport portfolio.”

This platform is without a doubt one that coalesces states in the industry and the discussions are very relevant as we are at the cusp of transformation to take our local aviation sector from good to great,” said Mr. Albert at the close of the event.

Following Seychelles’ participation in the event the country now has a total of 91 Air Services framework.